“It is critically important that we continue to provide opportunities for children in New Hampshire to engage socially, physically and intellectually,” stated Governor Maggie Hassan’s proclamation of May 2016 as Building on Hope Month. “I urge all citizens to recognize the important work of this organization and follow its efforts in working to build stronger and more inclusive communities in New Hampshire.”

The Michael Briggs Community center, which was named after an officer who was tragically lost in the line of duty in 2006, provides a safe and positive afterschool environment available to the over 8,600 inner-city youth within one mile of it, and provides an alternative to harmful behavior and encourages positive relationships between law enforcement and young people. The center is in desperate need of repair, and for nearly a year, Building on Hope has organized volunteers and solicited donations from dozens of businesses to help with the renovation. Build Week takes place this year from May 13 – May 22 with a celebration and grand re-opening starting at 12pm on the 22nd.

“Taking on a project of this scale has been intimidating at times, but the outpouring of support from the community is truly moving and we’re proud to support an organization that has such a positive impact on the community,” said Jonathan Halle, co-chair of Building on Hope. “Build Week is when the hard work really begins and there’s an endless list of tasks to be completed but we’re excited to reveal an entirely new space to these kids on May 22nd.”

Volunteers have already contributed to renovations in the first phase of construction which included installing a new HVAC system, demolition of the interior, installation of new electric wiring, walls, floors, a $25,000 kitchen remodel and more. With the support of Building on Hope, local businesses and donors, volunteers will complete the final phase of the 16,500 square foot building’s overhaul, and will have the chance to aid in the creation of transforming the Michael Briggs Community Center into a state-of-the-art, 17 room facility that will improve the reality of Manchester’s inner-city youth.

“Our aspirations for the Michael Briggs Community Center have been completely exceeded thanks to the vision and resources of Building on Hope,” said David Mara, Chairman of MPAL. “They will take this small community center and turn it into a beacon of hope for the youth of the City of Manchester.”

MPAL strives to foster and maintain positive relationships between the youth of the Greater Manchester area and members of the Manchester Police Department. MPAL’s Michael Briggs Community Center offers area youth a safe, structured environment to help kids grow, make the right choices and become productive members of the community. By providing mentoring along with sports and academic instruction in the afterschool and early evening hours, MPAL believes in making champions both in and out of the gym. All programs are free, and kids enjoy judo, aikido, wrestling, boxing, rugby and lacrosse in addition to receiving academic help from Manchester police officers. Once it reopens, kids will be able to use brand new computers for homework help, play on new gaming systems, participate in community and movie nights and have more established areas for each designated activity.

“This is more than a renovation project, it’s a strong signal to the youth of Manchester that they are valued members of our community, and a tribute to the family of Michael Briggs,” said Manchester Police Chief Nick Willard. “Such a tragedy can never be forgotten, and our city is proud to honor his legacy in such a meaningful way.” 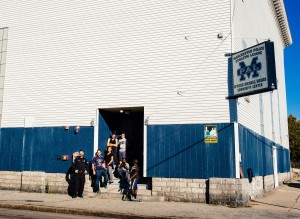 Manchester Police officers and MPAL students gather outside of the Michael Briggs Community Center, the nonprofit that was selected by Building on Hope to receive a full renovation which will be completed by Sunday May 22nd, and celebrated with the community starting at noon that day. Photo by Matthew Lamanno.