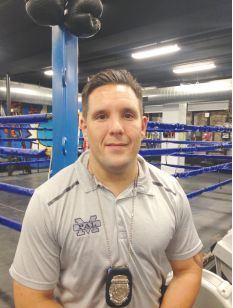 By Ryan Lessard
The Hippo

John Levasseur of Epping is the coordinator of the Manchester Police Athletic League. He’s been the coordinator since May 2015, but he’s been involved with MPAL for the past 10 years. The organization’s Michael Briggs Community Center recently underwent a $1.8 million renovation through Building on Hope.

What is the mission of MPAL?
To work with at-risk youth in the city, being able to give them programs to keep them off the street and keep them busy and to have a … positive interaction with police. It’s more to break the barriers between cops and kids as well. … Most interactions sometimes with police officers, it’s usually not a pleasant one on the streets. Sometimes it is, but rarely that’s the case because we’re responding to calls, we’re having to arrest people for certain crimes they commit and the kids see that and the kids are getting in trouble. So this is to have a different relationship with us, more of a positive one, to get to really know us and to understand what we do for a job. They’ll ask a lot of questions about why we do certain things and how we do them. I can explain that to them.
When it first started out, how was it accomplishing its mission?
It started off with a boxing program at the PAL building. And that was a police officer teaching boxing. There was a lot of working out, conditioning, getting in shape and it’s cops and kids working together. … It grew from there. … From there, we started to get more programs and get more volunteers involved. We started up a judo program and then, from there, we started up a wrestling program and an aikido program.
Now that it’s been renovated, what are some of the changes?
With the complete renovation we offered a lot of what I would call “elite level” fitness equipment that they wouldn’t normally get anywhere else unless they were paying a big gym membership. … Also, the grappling mat we have here is the biggest mat in the state. … We have the climbing ropes, peg boards. A lot of stuff, training-wise they normally wouldn’t have. … That gets more police officers in here as well, with the kids, to work out with the equipment. And it creates more relationships with the kids. … We have a full commercial kitchen now with a walk-in freezer, walk-in refrigerator, awesome stove… It’s absolutely amazing. … We’re looking to teach some classes with the kids, some basic [cooking] skills. … We have a new homework study room. … And we have a new game room that we have and I’m hoping [we can allow] them to earn hours to get into that game room [through study time].
Are there any more changes expected in the near future?
We have a lot of other new programs that are going to be starting possibly. It still needs to be passed by the board, but I’ve been approached by yoga instructors, a crew team — because we have a bunch of new row machines down in the boxing gym, so they can practice down there and they can go offsite to have a crew set up for rowing. Which is pretty awesome, some more opportunities for these kids. … I have a gentleman who’s interested in teaching them how to do resumes. … This is just in the first week that we opened, these are some of the volunteers who want to come in and help and teach these things. … My main task is really to jump into all the classes to work with the kids. That’s really my job description.
How was the renovation funded?
It was mostly in-kind donations. We had a lot of … grants, but a lot of companies stepped up. A lot of big companies … were able to donate material and labor for this project, which was absolutely amazing. … I think we had over 400 donors. … We sold a lot of naming rights for certain rooms for companies who wanted to have their name up there.
Read full article at: http://www.hippopress.com/read-article/mpal-building
In the Media