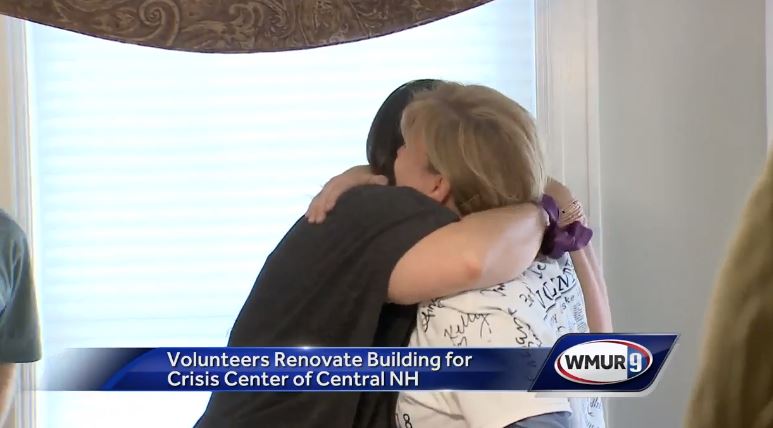 Thanks to a group called Building on Hope, the Crisis Center of Central New Hampshirehas a new, safe facility for its clients.

Paula Wall, executive director for CCCNH sent the application to Building on Hope over a year ago.

CCCNH was chosen from more than 35 candidates.

After 16 days of hard labor, most felt speechless as they took their first step inside the newly renovated emergency shelter for survivors of domestic and sexual assault.

“Survivors want to be believed. They want people to look at them without pity and without judgment,” said Tina Smith, a survivor and CCCNH board member.

“You said that you believe us. You believe our work is so important that we are deserving of this amazing effort, and I can’t thank you enough,” said Tara Reardon, chair of the board.

“We basically have done an entire gut of the building. We tore the chimney out. All new mechanical, all new electrical, all new lighting,” said Jonathan Halle, co-chair of Building on Hope.

Some of the finishing touches were being put on the facility right up until the ceremony.

Organizers said none of this would have been possible without the volunteers and the donations.

“It’s amazing that you can have so many people come together to produce something like this,” said Karen Van Der Beken, co-chair of Building on Hope.

Each room had its own designer and contractor and will soon be a place where someone can start over.

“When they’ve made the decision that they have to get out of the situation that they’re in, this is going to be so welcoming,” Van Der Beken said.

“Having a place to come that they really feel love and they feel embraced and that they feel that there’s something better than what they’re experiencing, and this is a springboard to something in their life,” Halle said.

Last year, the agency had to turn away 319 women and children, but it said this new facility will make all the difference.

To learn more about the Crisis Center of Central New Hampshire, visit its website.