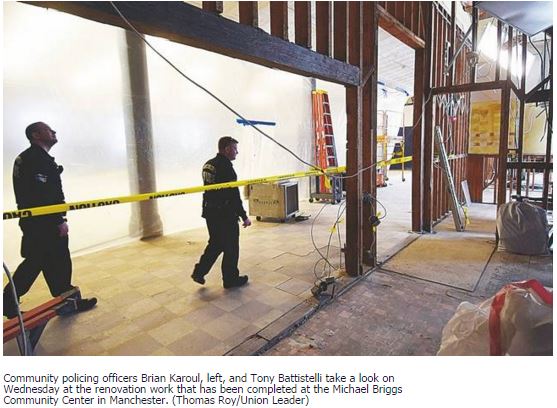 MANCHESTER — Hoping to finish the renovation of an inner-city youth center by May, the organization Building on Hope has launched an 11th hour fundraising push for $100,000 to pay for supplies and other costs associated with the effort.

If the money comes in and volunteers continue to work on the project, a renovated Michael Briggs Community Center will open this May at the corner of Lake Avenue and Beech Street.

The $1 million project looks to upgrade and renovate the Manchester Police Athletic League-owned building, where children will be able to meet with police officers and participate in all sorts of activities: martial arts, help with homework, gaming, healthy meal preparation and movie nights.

Last June, Building on Hope announced the project. Late last year, city officials lent the organization $500,000. Corporations have made five-figure donations. Building on Hope’s main source of support is from contractors, who donate equipment and labor.

“Obviously, with a few months left there is quite a long way to go here,” said E.J. Powers, a spokesman for the effort. “A $5 donation, a $25 donation, any amount will really help push this project forward.”

Powers said the strong economy has made it difficult for contractors to provide volunteer labor to the project.

The project is the biggest yet for Building on Hope. More than 8,600 at-risk youth live within a mile of the Community Center, which is named after slain police officer Michael Briggs.

“The relationship between police officers and young people, especially vulnerable populations, is so imperative for any community,” said Manchester police Lt. Brian O’Keefe, the executive director of MPAL.

Anyone interested in making a donation should visit www.gofundme.com/Manchester-police. Businesses that donate can receive at least 75 percent of that contribution back in the form of a state business tax credit.

“Since announcing the project in June we’ve received a tremendous amount of support and our volunteer base grows each week. Thus far, we have over 100 companies committed,” said Karen Van Der Beken, co-chairman of Building on Hope.