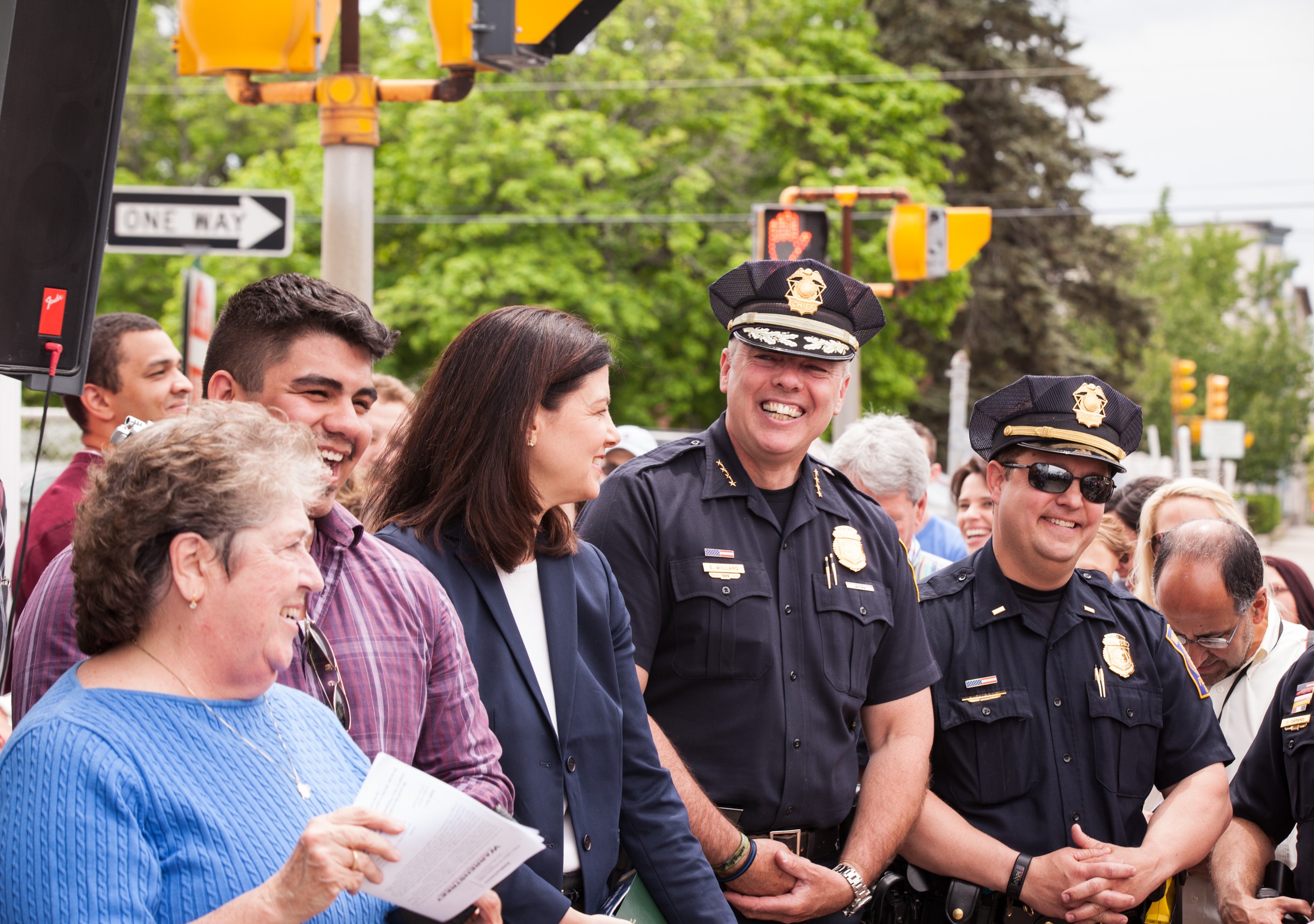 Building on Hope rallied hundreds of volunteers and businesses from around the state for a week-long renovation of the Michael Briggs Community Center, which recently re-opened

Manchester, NH – Building on Hope, an organization of volunteers including designers, architects and builders who provide renovations to deserving non-profit group facilities, recently completed 10-plus days of around-the-clock work on a $1.8 million community-funded extreme renovation of the Manchester Police Athletic League (MPAL) Michael Briggs Community Center in downtown Manchester. Nearly 400 volunteers and dozens of companies collaborated in the effort to transform the building that provides an alternative to harmful behavior for Manchester’s inner-city youth and encourages positive relationships between law enforcement and young people. The transformation of the Michael Briggs Community Center was the fourth and largest project undertaken by the all-volunteer group in the past seven years.

The Michael Briggs Community center, which was named after an officer who was tragically lost in the line of duty in 2006, provides a structured environment for the over 8,600 inner-city youth within one mile of it to help kids grow, make the right choices and become productive members of the community. By providing mentoring along with sports and academic instruction in the afterschool and early evening hours, MPAL strives to foster and maintain positive relationships between the youth of the Greater Manchester area and members of the Manchester Police Department. MPAL believes in making champions both in and out of the gym.

“Building on Hope told us to dream high, but this is beyond our wildest dreams,” said Dave Mara, Portsmouth Police Chief and MPAL Chairman. “We now have the resources to provide even more opportunities for the community to take advantage of through our programming and we’re truly blessed to have Building on Hope in our corner.”

On Sunday, May 22, more than 250 volunteers, police officers, community members and MPAL participants viewed the renovation for the first time. Among the crowd was Manchester Mayor Ted Gatsas, U.S. Senator Kelly Ayotte, Governor Maggie Hassan, Michael Briggs’ family and Ryan Hardy, one of the Manchester officers who was shot in the line of duty one week ago.

A total of 17 rooms were renovated in the 16,000 square-foot, 105 year old facility. Rooms vary by purpose, from a state-of-the-art kitchen, to a homework room with laptops and internet access, to a game room with a TV and gaming system, to offices and storage rooms, and every inch of the building in between including a mural dedicated to Michael Briggs along both corners of the building’s exterior.

Examples of the room transformations include:

Boxing Room – In addition to adding new fitness equipment, new rubberized gym flooring, a boxing equipment storage room, shower and a lounge area with bean-bag chairs, the art on the wall reflects everything MPAL stands for – community, trust and movement. Mural artists plastered the walls with inspirational quotes, bright colors and even a scene of the Manchester skyline.

Community Room – A once dull room with peeling paint is now a bright and cheerful multifunctional room that can seat up to 250 people for community dinners. A brand-new sound system and ceiling mounted projector with a 161 inch remote-control retractable screen will allow MPAL to host movie nights. There is also a new wireless microphone system tied into the speakers for MPAL’s education and awareness nights. Individual rooms have been built off the community room including bathrooms, the game room, the homework room and two offices. New wrestling mats that now are suitable for hosting competitions have been provided.

Kitchen – Prior to the renovation, the kitchen hadn’t been usable in over twenty years. Complete with all stainless steel appliances, two walk-in refrigerators and freezers, restaurant-quality oven and stove, heating stations and counters, multiple sink hookups and a dishwasher, this $150,000 kitchen will enable the Michael Briggs Community Center to prepare food is large quantities for weekly spaghetti dinners for the neighborhood. MPAL coordinators also plan to integrate cooking classes into their afterschool offerings in the near future.

With its fourth project finished, hundreds of engaged volunteers and $3.6 million in community-funded renovations, Building on Hope is setting its sights on the next project that will help improve the lives of people living in New Hampshire. 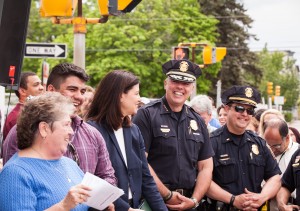 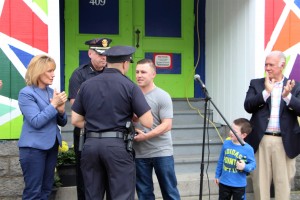 With Governor Maggie Hassan and Manchester Mayor Ted Gatsas on each side, Manchester Police Chief Nick Willard steps back to allow MPAL coordinator John Levasseur the opportunity to present an American flag gifted from US Senator Kelly Ayotte to Manchester Officer Ryan Hardy during speeches given at the Building on Hope Reveal Day event. Last week, Officer Hardy was shot in the line of duty.

Looks of surprise and excitement were all around on Sunday, May 22, when MPAL students, Manchester officers and members of the community were welcomed back into the newly renovated Michael Briggs Community Center. Building on Hope coordinated the $1.8 million renovation exclusively through donations of funds, labor and materials from local businesses. 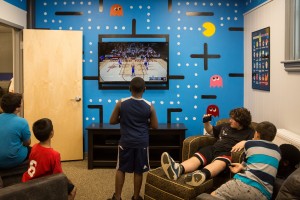 MPAL students wasted no time before utilizing their new game room located off the community room in the Michael Briggs Community Center which opened its doors for the first time since February when Building on Hope’s extreme-makeover style renovation began. (Photo: John Benford Photography) 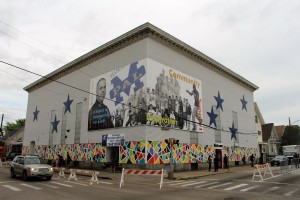 Until Building on Hope’s Reveal Day on Sunday, May 22, this mural dedicated to Manchester officer Michael Briggs, who was killed in the line of duty nearly 10 years ago, was concealed in anticipation of the grand re-opening of the facility that serves as an alternative to harmful behavior for Manchester’s inner-city youth. Over 250 members of the community, MPAL and Building on Hope gathered in celebration.