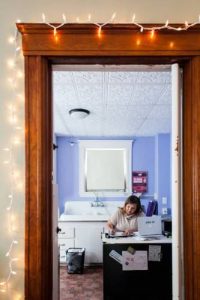 From within a conference room, an infant’s cries could be heard. A young mother was working to prepare the child’s lunch in an adjacent, although tightly constructed, kitchen used by families who have fled domestic violence.

One floor above, advocates, prevention education specialists and student volunteers shared office space in a converted bedroom. The executive director worked nearby from a desk wedged into a tight corner, which allowed staff access to a large sink, mini fridge and microwave a few feet away.

On a recent afternoon, the smell of lunchtime chili rose to the third floor, where mothers rested with their children in private rooms they now call home.

Survivors live for an average of five months in this temporary shelter where a staff of nine work each day. For years, everyone has tried to make the best of limited resources. But in just a few months, the space inside the Crisis Center of Central New Hampshire in Concord will be transformed.

Thanks to a volunteer-led project and other private donations, the center will become almost unrecognizable – inside and out. Beginning in late May, the now-13-bed shelter will sleep 24, and four bedrooms will become seven as walls come down and staff offices move out.

“I have been doing this work for 20 years and I’ve watched the dishonor that survivors feel sometimes coming into a shelter,” said Executive Director Paula Kelley-Wall, who has led the crisis center for 18 months. “From the beginning, I committed myself to making Concord different.”

What Kelley-Wall once envisioned as a five-year plan is coming to fruition over a roughly two-week period this spring. The three-story shelter will be gutted and rebuilt as part of what’s been called “an ‘Extreme Home Makeover’ for nonprofits.” Building on Hope, the volunteer organization that has completed $3.6 million in community-supported, nonprofit renovation projects in the state since 2009, is coming to Concord.

For Kelley-Wall and her staff, it’s a dream come true. But the shelter project is just the beginning of the story.

At the same time the center is gearing up for a complete overhaul, the nonprofit organization’s board members are eyeing prospective real estate – with an undisclosed spot in mind – to house victim support services and staff offices. The goal is for the space to be a one-stop shop for those in need of legal services, counseling, social supports and more.

The Center for Survivor Support recently received a $200,000 donation from Robert and Marianne Fleischman of Concord, who hope in leading the effort others will find it in their hearts to give to a cause too often overlooked.

“Domestic violence isn’t something that people want to talk about. Nobody wants to talk about saving a woman from years of violence and abuse and putting her in a shelter because it isn’t pretty and it isn’t happy, but it happens all the time,” Robert Fleischman told the Monitor during a recent interview at the crisis center. “And, it would be wonderful if you could draw up a picture and say, “These are the people perpetrating this so let’s stop it,’ but you can’t.”

The crisis center provides support services and shelter for victims of abuse in Merrimack County. In 2017, the center served 1,184 people, answered 4,950 hotline calls and provided 2,991 bed nights in the emergency shelter. It also turned away 180 women and 159 children in need.

The 13-bed shelter is full most nights – and the need is growing. By expanding the capacity of the shelter, advocates say they hope to offer more victims and children a safe space to go.

The crisis center never used to be on the public radar, in large part because its location wasn’t readily shared and community members weren’t welcomed in unless they were providing services, Robert Fleischman said. But in recent years, fundraising events like Walk A Mile in Her Shoes have served to spread awareness and understanding of what the center does and the services it provides to victims of domestic and sexual violence.

The Fleischmans quietly began gifting to the center in its less public years to help fund smaller initiatives, such as security upgrades and staff retreats. But they were also looking for that magic opportunity to do more, and that came last year when Building on Hope chose the crisis center as its next stop.

Marianne Fleischman, an OB/GYN, said she has too often seen the horrific effects of domestic and sexual abuse. She said the services crisis centers provide are invaluable, but too often underappreciated.

On average, victims of domestic violence attempt to leave a relationship seven times before staying away for good. In many cases, an abuser has isolatesd a victim by leaving her with limited to no financial or social resources to leave and threatened her or the children with increased physical harm should she try to run.

For the survivors who seek shelter at the crisis center, it’s important that they know they are believed and supported, Kelley-Wall said.

“Survivors need to know that they matter and that they matter to people who they wouldn’t even think are in their corner,” she said. “When they come to our center, we’re tasked with making them feel safe enough to heal, and when you come in here now, it’s not that place.”

The upcoming renovation project and ongoing public campaign is changing the narrative.

“This is really our community finally telling survivors that you matter in our world; we’re listening and paying attention, and you have an opportunity to do what you want to do – and more,” she said.