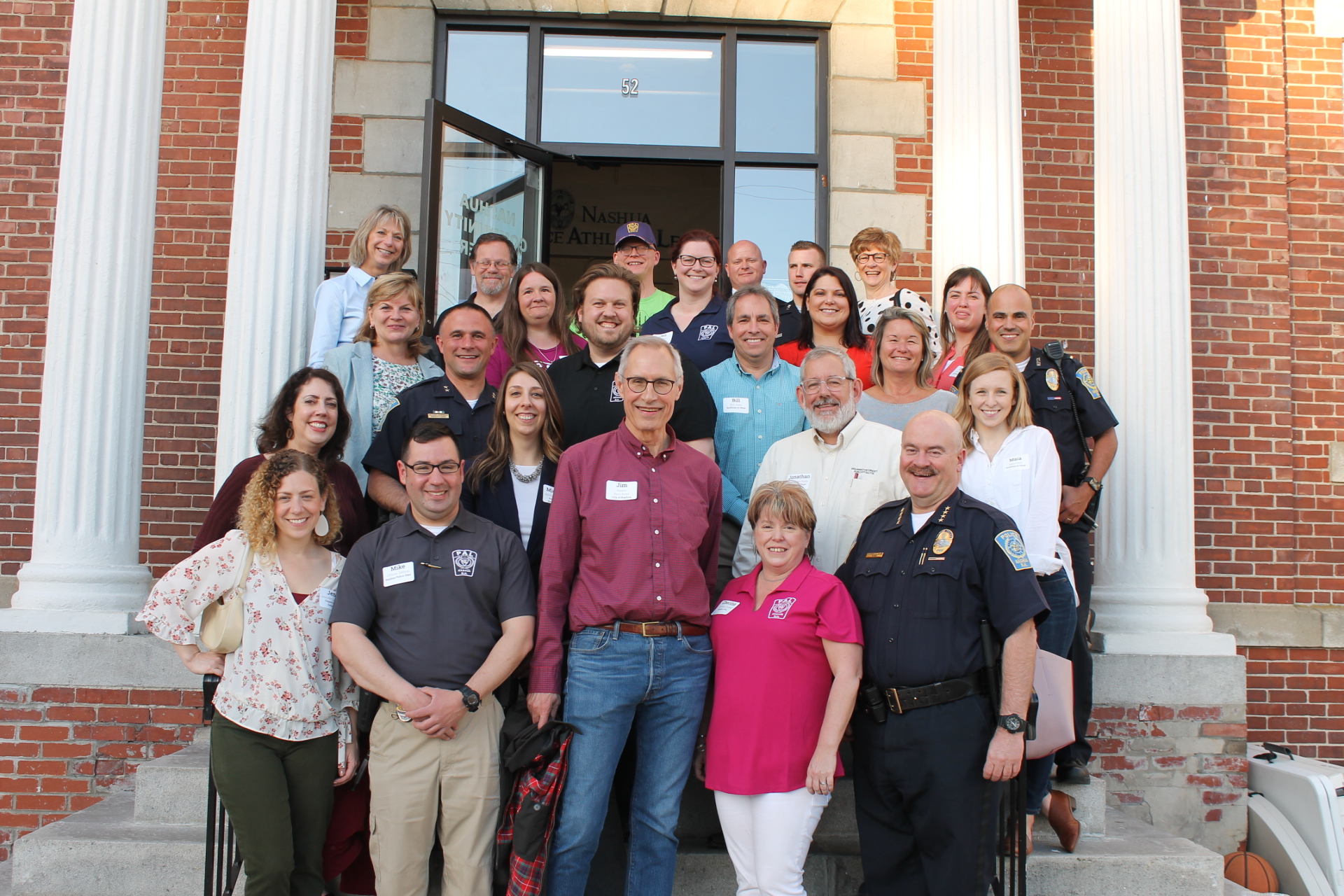 Nashua, NH – Building on Hope, an organization of New Hampshire volunteers, including designers, architects, suppliers and builders, who have completed more than $4.1 million in community-supported renovation projects, has announced the Nashua Police Athletic League (Nashua PAL) will receive major renovations to its facilities in 2020. Building on Hope representatives, dozens of Nashua Police Department officials and Nashua Mayor Jim Donchess gathered on May 8 to announce the project during a Greater Nashua Chamber of Commerce ‘Business After Hours’ event held at Nashua PAL. The Nashua PAL Youth Safe Haven lives up to its name. It provides a safe environment for Nashua’s at-risk youth to gather outside of school; approximately 20-percent of both felony assaults and heroin overdoses in Nashua occur within one mile of Nashua PAL. Nashua PAL’s free afterschool and summer programming is designed to help children and teens build leadership skills through educational experiences, mentoring and the development of trusting relationships between Nashua’s at-risk youth and Nashua police officers. Building on Hope’s renovation will allow Nashua PAL to optimize its space and to increase services to the more than 2,000 youth in southern New Hampshire who use Nashua PAL programming each year.

“The process of selecting our non-profit is always a challenge, as there are dozens of worthy non-profits that apply, but Building on Hope fell in love with Nashua PAL and the large impact it has on the Nashua community, so we are thrilled to embark on our sixth renovation project with this inspiring group,” said Jonathan Halle, Building on Hope co-chair. “The scope of the project is still underway. We estimate the total renovation cost may be upwards of $500,000, but we are confident that with the support of the Nashua community and beyond, we can deliver the amazing, safe space Nashua PAL kids deserve.”

Every two years, Building on Hope takes on a new challenge, rallying volunteers, gathering resources and focusing attention on a project selected for its potential to create enduring positive change for the immediate community and the state as a whole.

Nashua PAL was founded in 1989 and the group has been operating out of the Youth Safe Haven since 2004, located in what is locally referred to as Nashua’s inner-city “Tree Streets.” On any given day, more than 65 “PAL kids” between the ages of 7 to 18 come to Nashua PAL after school and during vacation periods to participate in free activities, including homework club, cooking, crafts, photography, one-on-one mentoring, boxing, open gym, gaming, young female empowerment opportunities, field trips and more, with the support of staff, Nashua police officers, community volunteers and interns from colleges and universities across New England. More than 400 Nashua youth are cared for each year at Youth Safe Haven at no cost to families.

Since 2017, the daily attendance at Youth Safe Haven has increased by 25-percent. Due to the building’s layout, with two large activity rooms on separate floors and three smaller rooms spread around the building, Nashua PAL has been forced to shuffle programming to combine groups in the same space and to expand outside of the building. At 102 years old, the Youth Safe Haven building is in need of a major modernization and space reconfiguration to meet the needs of a steadily increasing membership. By removing unnecessary design barriers, expanding and separating existing spaces and renovating common spaces for ADA compliance, along with overall upgrades throughout the building, Nashua PAL will be able to offer a safer and more efficient program space for Nashua’s at-risk youth community.

“It feels like we are bursting at the seams with our current layout and we are ecstatic to think creatively about optimizing space to best serve a growing population,” said Shaun Nelson, Executive Director of Nashua PAL. “With Building on Hope’s support, we will be able to further demonstrate to these kids that their community cares deeply for their success, and continue to focus on our mission of keeping our youth active, productive and safe.”

Over the course of the next year, Building on Hope will meet regularly to plan for Build Week, which will take place in May of 2020. In May, Nashua PAL will evacuate Youth Safe Haven for approximately one week, and return to a completely transformed building. Building on Hope and Nashua PAL are seeking help from the community to complete this project. Tax-deductible contributions, volunteer commitments or donation of materials are essential to completing this project. For more information or to make a donation, visit www.buildingonhope.com.

“Nashua PAL is incredibly deserving of the dedicated volunteers Building on Hope has to offer,” said Karen Van Der Beken, Building on Hope co-chair. “Planning for this project is well underway already, and we can’t wait to provide these kids with a space that feels renewed and reflective of the positive energy they exude.”

Previous Building on Hope projects include:

Founded in 1989, the mission of Nashua Police Athletic League (Nashua PAL), which serves more than 2,000 youth in Greater Nashua, is to create a positive attitude between the children of Nashua and members of the Nashua Police Department through Nashua PAL sponsored sports, enrichment, recreation and educational activities. Nashua PAL’s Youth Save Haven, located in Nashua’s inner-city, provides a safe space for at-risk youth to access the resources they need to become community leaders – at no cost to their families. To learn more about Nashua PAL, visit www.nashuapal.com.